A while ago, I saw this map, and thought it was pretty interesting:

It represents the USA’s 48 contiguous states (plus Lake Michigan) crammed into a rectangle in a way that preserves their borders. For example, California (in the bottom-left corner) borders, going clockwise, Oregon (green), Nevada (blue), and Arizona (purple).

I describe this a a topologist’s map because topology is a branch of mathematics concerned with the way that space is connected. In topology it’s common to think of stretchy, distortable surfaces that can be moved around without being punctured or torn. In the map above, the shapes of states are distorted, but as long as they’re not torn or separated, this is topologically equivalent to a normal map.

My first thought after seeing this was ‘I wonder if you could make a world map this way?’

Obviously you can’t do it in exactly the same way (and haven’t been able for the past 175 million years), but I decided to try it out and see what it looked like.

The plan, roughly speaking, was:

I ended up having to manually collate a list of countries and their borders. Plotted as a network using the networkx and netgraph Python modules, this was the result:

Here you can see two distinct landmasses – America on the left and Afro-Eurasia on the right. North and Central America appears basically just as a string of countries, while South America is a bit more interesting. For the other landmass, Asia appears on the top-left, Europe on the bottom-left, and Africa on the right, connected by Egypt linking into the Middle East. Note the existence of two pairs of bordering countries at the top centre: the Dominican Republic and Haiti, and Ireland and the UK.

We can try to neaten this up a bit to get

which I guess you could interpret as a butterfly or a dragon or something. Not much has changed really, aside from a rotation and a flip.

We can immediately see that this is not going to fit in a neat rectangle like the USA map – well, it technically could, but it’s going to look awful. This has also demonstrated a problem with trying to automate this process: the graph has no idea of chirality.

Imagine that this graph existed as a series of balls connected with string. You would be able to spin the Egypt (EG) ball around and flip Africa relative to Eurasia. Looking at the string of American countries, Belize (BZ) and El Salvador (SV) are both shown on the same side, although they are on the Atlantic and Pacific coasts, respectively.

For a slightly more complex example, Europe is connected to Asia only through Russia and Turkey. There are two ways to walk along coastline from Russia to Turkey: the relatively short trip around the Black Sea, passing through Ukraine, Romania and Bulgaria; or the alternative, along the Baltic, Atlantic, and Mediterranean coasts. This graph has no idea which is ‘correct’ – you’d be able to turn the Black Sea inside-out while preserving the graph, in this model.

It was at some point while I was thinking about adding extra countries to represent seas that it was time to call the automation quits, and just make the map manually. This has some advantages – I get to choose the overall layout, it’s much easier to include stylistic elements, and I don’t have to spend ages describing to a computer what common sense is.

My chosen software to make the map was Inkscape; it’;s the first time I’ve tried making a map, but the ability to ignore complex coastlines and borders means that I can just represent each country as a simple shape. I decided to emulate a T and O map, for no particular reason beyond it looking nice. A few hours of surprisingly relaxing Inkscape later, I arrived at 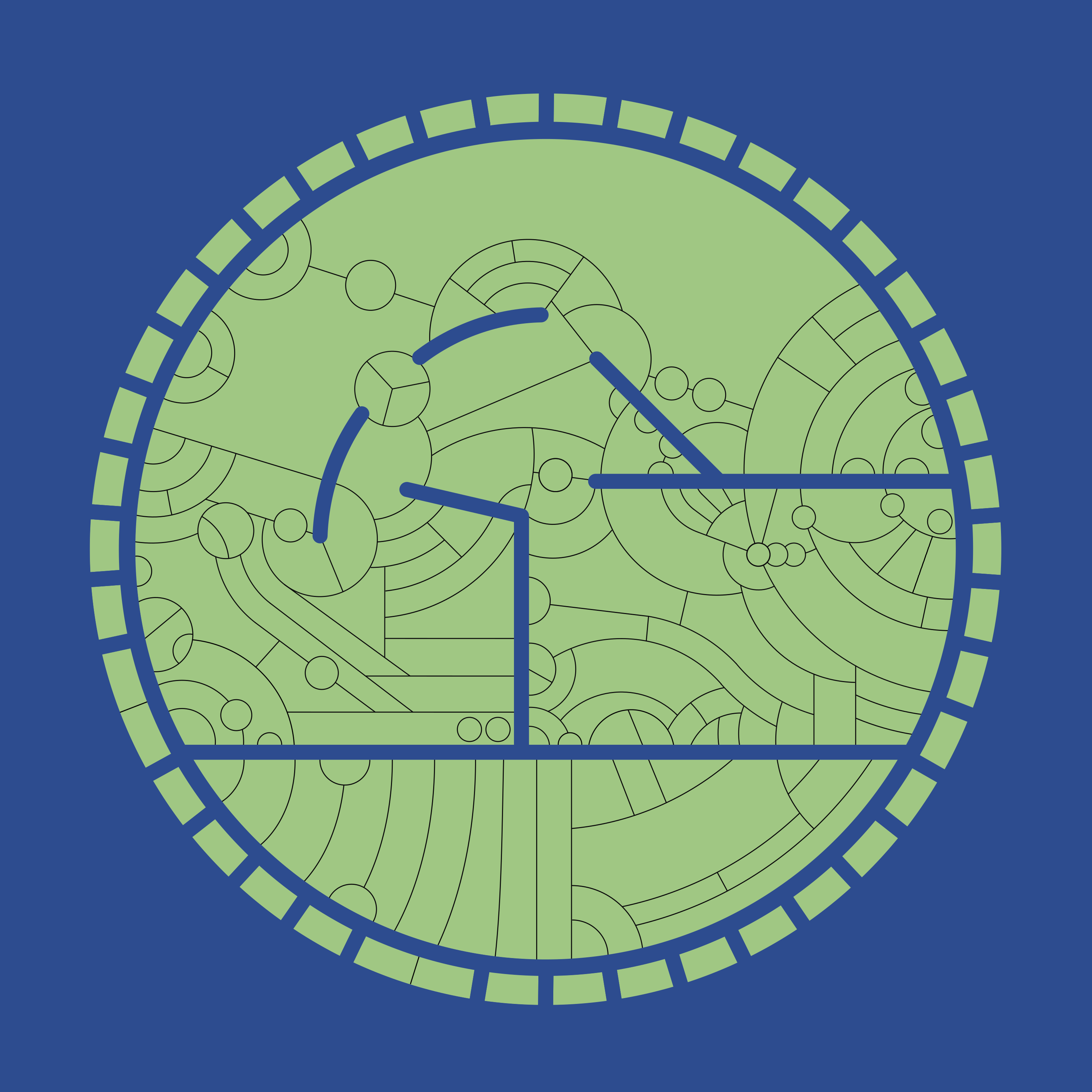 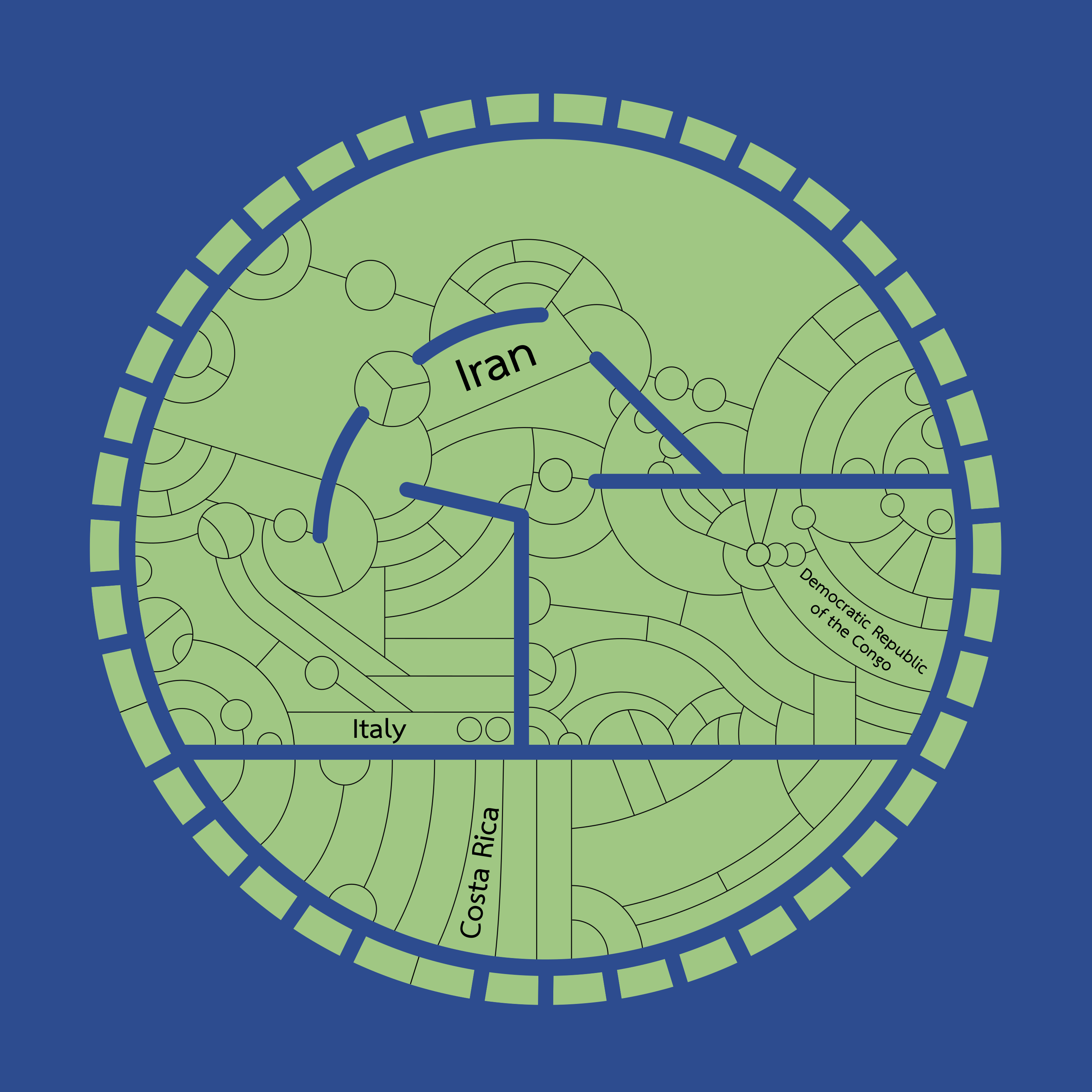 Note: at the moment, I’m aware of a few errors in this version. They are:

I’ve deliberately left the map unlabelled, because I enjoyed going through and trying to identify the countries. Swipe across the image to reveal a few hints – remember that east is up, and north is left.

This kind of map has a few interesting quirks: for example, Spain and Morocco appear nowhere near each other here, and Indonesia, Brunei, and Timor-Leste make an appearance, despite being on totally separate landmasses to the other nations.

There’s not a huge amount more to say about the final map, so here it is – I’ll add a couple of final comments below:

After people were surprisingly interested in this map, I have made posters available to buy here (if you’re interested in a digital copy, send me an email: tom@(this website) ).

28 comments on “The topologist’s world map”